As we have seen for island closer to the Mainland and small islands it is possible to reach a percentage in the renewable mix that is relatively high, even all the way to 100% for the Isle of Eigg.  The population of these islands is low, from a few hundred to a 100000+, but what happens when the population is around 400000?

The power needs are not the same, and power must be generated distributed differently. There needs to be a strong base feed and a top-up intermittent feed.

In Martinique, the electricity production system can supply  1600+ GWh per year.  The average peak power requirement is about 235 MW. The possibilities of combining all energy production could, in theory, reach a peak power potential of 496 MW.

The generated electricity caters for needs such as industrial production of rum, the tourism industry, the construction industry, the new tram line and also ensuring all air industrial and domestic conditioning units are powered.   With Martinique being located in the tropics, the island also needs enough light for the regular 11 to 13-hour nights.

Electricity in Martinique comes essentially from fossil fuel, there are two main plants, the biggest one is located at Bellefontaine and runs on diesel.  it is currently under renovation to improve its efficiency and reduce its sulfur-based emissions.  The combustion efficiency has been increased to the latest technical advancements and scrubbers capture the sulfur emissions. The power generated here can be 234 MW.

The second plant is located near Fort-de-France with a few more gas turbines scattered around.  These fossil fuel plants are supplemented by the power used in the SARA Lamentin oil refinery.  When the oil refining generates surplus power, its 3 MW is fed into Martinique's grid. 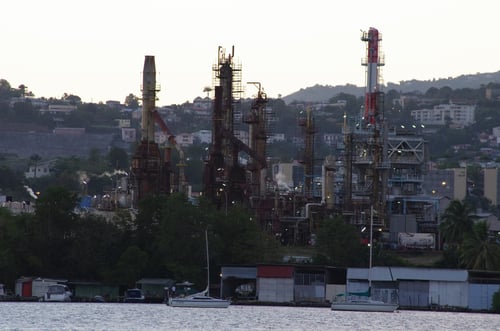 The fossil fuel plants generate 93,7% of the electricity on the Island so far this year.   Further energy coming from combustion comes from waste incineration plant in Fort-de-France where a steam turbine generates 4,4 MW.

There is also the Albioma biomass processing plant at Galion which uses bagasse derived gas to supply its gas turbine derived from a Boeing 747 jet engine and burns the dried resulting matter to power a steam turbine, the total power today is 40 MW.

One would think this island is ideally placed for renewable electricity, it benefits from intense sunshine and trade winds "Les alizés".

The objective for the Island is to include 50% renewable energy in the mix and achieve complete autonomy from fossil fuels in 2030.

There is also considerable geothermal potential under the "Montagne Pelée", the ever-threatening volcano, which caused the near disappearance of St Pierre in 1902.  The potential locations where the studies have highlighted promising potential are the hot springs areas on the island located near Diamant Rock and on the West flank of the Montagne Pelée, although this area north of Pitons du Carbet has pristine wildlife and rainforest.

The GeoCaraibes project looks at linking 4 Islands St Lucia, Martinique, Dominica, and Guadeloupe together into one "Geogrid". Guadeloupe's geothermal plant already account for 5% of the electricity production mix - 80% remains fossil fuel based. In cooperation with the neighboring Island of Dominica, geothermal energy could potentially generate up to 40 MW

The sea also being so warm at its surface and much colder closer to the bottom has quantities of trapped energy that are not negligible.  In Martinique, the technology named OTEC (Ocean Thermal Energy Conversion) showcased by the NEMO (New Energy for Martinique and Overseas) project is on its way to generate 12 net MW by 2020.

Note: This project has been shelved due to complication to design and build the 6 m diameter, 1 km long cold water inlet pipe and difficulties to obtain public funding. "Estimated" completion date 2023.

Yet the renewable proportion in the mix is of the order of a few percents.  There is a small wind farm located in the south of the island at Vauclin and a very large wind farm is being deployed in the North of the Island in Beauséjour near Grand-Rivière.

The implementation of the large wind turbines prevents normal life from taking place in Grand-Rivière, to the point that the local shopkeepers and business owners have held up the transport of the wind turbine parts to the installation site.  The power generated by the site will be 12 MW.  These turbines would also be equipped with a 2,5 MW  Li-ion energy storage facility to buffer the wind energy variations.

The management of large projects and their impacts on the human and natural environment always require cautious assessment. Even if the long-term benefits of the projects can be visible, the short term aggravation remains printed in the memories.

The wind energy initiative is blunted by a fragmented volcanic terrain with difficult access and where land allocation is not straightforward with the surrounding inhabitants are reticent to see the wind turbines.  Several initiatives in the south of Martinique such as "Pain de Sucre " and Dehaumont are either canceled or delayed.

The solar energy drive is also gaining momentum, but not quickly enough.  There are some local initiatives such as project ARJUN  and at also at individual level. The total power coming from solar is 65 MW.  Solar systems are also used to generate hot water using black water tanks on the roof where heat harvested from sunlight radiation. Further projects using solar energy could amount to an extra 40 MW of power available.

In order to make these renewable energy solutions possible a great amount of energy storage will be required.

Li-ion technology seems to be the preferred option today but this technology has a limited amount of cycles and does not tolerate high levels of current going in or out.  In order to increase the life of these battery operated energy storage systems, an addition of ultracapacitors ought to be considered.  Their power density could prevent the majority of short blackouts on the island.  Several  containers scattered at key points on the grid would provide power for a few seconds and smooth frequency and voltage variations to deliver a close to perfect current despite the peaks and troughs generated by the renewable energy.

Ultracapacitors would prevent blackouts and increase the energy storage solution lifetime, they are already doing so on the Isle of Eigg and a scaling up of the technology to Martinique's size can seem optimistic, but it is something that we should aim for.