Who would have thought?

Today it is apparently possible to use the energy from the waves not just for surfing or getting back to the beach without having to swim, but to generate electricity.

How on Earth Sea is that possible?

First, the waves on the sea must be associated with errr.... uhmm... well - Waves! An oscillatory movement characterized by amplitude and frequency, just like springs, AC electricity, music, sound, radio waves... There is energy in all of those. 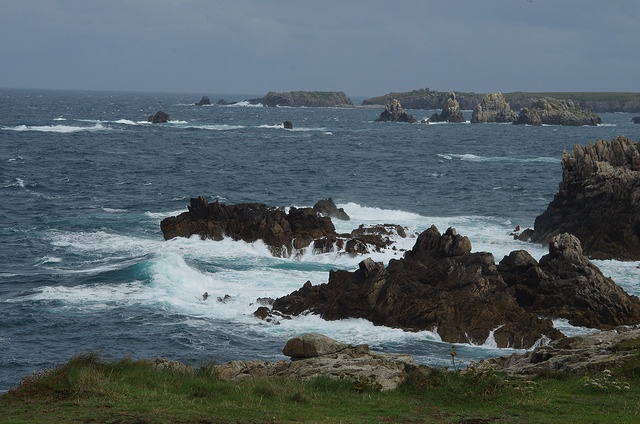 We know how to easily generate such waves, and how the wind induces waves on the sea. Yet harnessing the wave energy is a challenge, and to this day there are no "best" means of capturing the wave energy in a super efficient manner. In fact, it doesn't really matter if it is very efficient as there is so much surface and an infinite amount of waves out there (OK - quasi-infinite for the purists). It is thought there is enough wave energy to replace the world supply generated using all current means combined!

The different ways of capturing the wave energy are quite varied in terms of concept and efficiency. It is not all pink, sorry - green. The environmental issues are real too. For instance, noise propagates much more efficiently in water than in air, and moving parts such as turbines always make noise. Large mammals and fish have a very acute aural sense.

Also, the saline environment is one of the most hostile in terms of corrosion. The parts have to be either regularly maintained or made out of non-corrodable material. This can drive the costs up.

There are 6 "main" principles currently used to recuperate energy from waves.

1) The Point absorber buoy  anchored to the seabed moves according to the wave pattern. The buoy is connected to a geared rack attached to the cable from the bottom. Inside the buoy, there is a pinion rotating as the buoy goes up and down the rack. The pinion is linked to a small generator creating electricity.

2) The "Sea snake" or surface attenuator is made of several boxes which have pumps activated by the water and wave pattern. these pumps are passive a drive small electrical generators, thereby producing electricity.

3) The oscillating wave converter consists of a moving and fixed part that oscillate according to the wave pattern. This type of recuperation allows for numerous combinations and movements and is still being explored in terms of concepts.  The issue with this concept is that sometimes organisms such as mussels or algae can decide to reef there.

4) The oscillating water column is anchored to the seabed and uses airflow created by the wave oscillation to generate electrical energy through the air induced spinning an air fan located at the top.  An onshore variant consists of having fixed channels (quite long depending on local tidal effects) and linking a turbine at the top that would spin according to the air flow created by the wave-induced surface level changes.

5) The overtopping devices are reservoir devices that collect water as the wave enters a channel, once the wave recedes, the water is freed spinning a turbine. These devices can be very large and expensive to install.

6) The submerged pressure membrane filled with a fluid (It can be water). As the membrane gets hit by waves, its surrounding pressure varies. Inside the membrane, a turbine or a pump activates a generator.

Converting random profiles to acceptable ones

This technology is still in its infancy and possible solutions are being evaluated at this time. The main issue is that the waves do not subscribe to a constant amplitude or frequency, some pack a bigger punch than others. The power is difficult to control, but this is not impossible.

Ultracapacitors with their ability to react quickly to supply and demand variations can make this power delivery stable and predictable. The frequency can be tailored and the energy can be redistributed according to demand profile.

Skeleton Technologies can provide a system based on the average oscillations of waves (4.6 seconds) that will distribute a current that is acceptable to grid standards. This proposed system has the advantage of not needing inverters, so the low cost and the low ESR of the SkelCaps can be fully exploited.

The diagram shown here depicts a plug-and-play system where the ultracapacitors act as a buffer to carry the peak and RMS energy from the wave power profile and to the grid, resulting in a higher RMS power grid profile .  Thanks to the ultracapacitor bank this extra energy is used otherwise it would simply not reach the grid.

The example below shows a 500 kW application working over 4 to 5 sec. which is the common wave frequency. 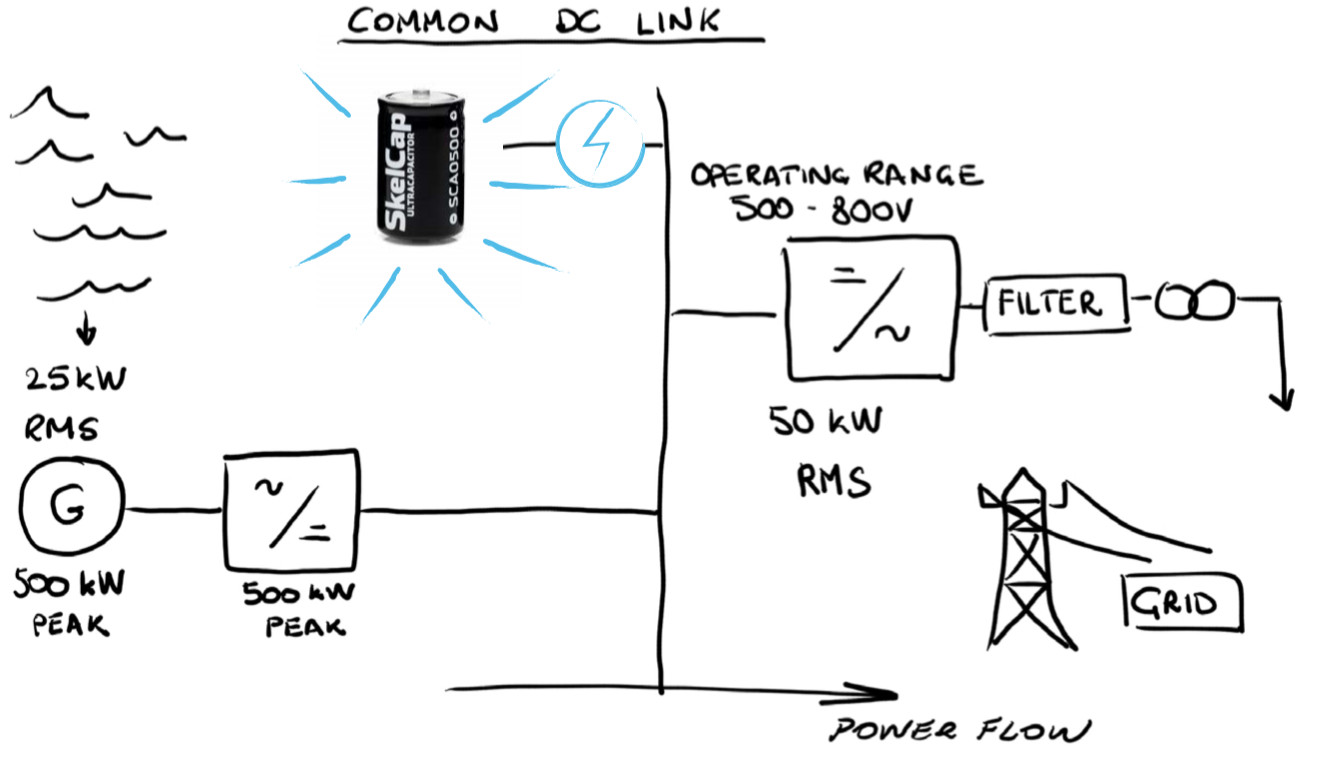 This energy is free and plentiful, totally renewable.

What our clients say

Sign up for Our Newsletter and Get a Free White Paper!