Posted by Jussi Pikkarainen on - 15 September 2015

A unique, multipurpose UGV (unmanned ground vehicle) that will be unveiled at this month’s DSEI 2015 will be the first vehicle of its kind to use ultracapacitor technology. The high power cells from record-breaking manufacturer Skeleton Technologies will be used to deliver greatly increased energy efficiency and product reliability. 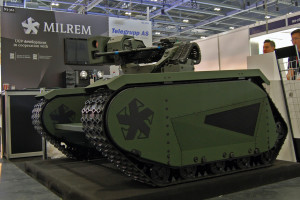 The hybrid UGV has been developed by Estonian defence solutions provider Milrem, a company specialising in military engineering, repair and maintenance. Unlike existing UGVs it provides a universal platform for any application from communication relay to medevac, lifting platform to fire-fighting. This plug-and-play capability is made possible by housing all equipment inside the vehicle’s tracks.

The multipurpose UGV can be used for a wide range of defence requirements including reconnaissance and observer missions, targeting weapon systems and providing support solutions such as medical supplies. The universal platform allows operators to optimise their vehicle fleet and reduce life cycle management costs with simplified maintenance and spare supplies.

With energy consumption becoming an increasing concern in the defence sector, the Milrem UGV was designed to be as efficient as possible. A highly sophisticated control unit regulates energy flow between the diesel generator, electric motors and Skeleton Technologies’ ultracapacitors. This system reduces overall energy consumption by 25–40%. The ultracapacitors also ensure reliability by starting the vehicle in cold conditions or after prolonged periods in storage.

Kuldar Väärsi, Chairman of the Board at Milrem, explains why they chose to work with Skeleton Technologies: “Firstly we chose these ultracapacitors for their performance; we knew they would deliver the efficiency and reliability we required. But we also liked the company’s approach to working alongside their customers to develop new products and new ideas.” 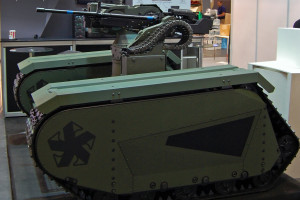 Ultracapacitors are a highly efficient form of energy storage that are able to provide very high currents of power. Skeleton Technologies’ cells can also charge and discharge millions of times, offering lifetimes up to 500 times longer than batteries. Crucially for applications in colder climates, the technology can operate in temperatures as low as -65 °C.

“We are proud to have worked with Milrem for our first deployment in the defence sector,” explains Skeleton Technologies Chief Executive Officer, Taavi Madiberk. “From powering space shuttles with the European Space Agency to ensuring cold weather start in trucks, the range of applications for our high-power technology is increasing all the time.”

The first prototype of the Milrem multipurpose UGV will be unveiled in London at Europe’s leading defence and security event, DSEI 2015 which runs from 15 to 18 September. Milrem can be found at stand N3-362.

Milrem was founded in 2013 by SEBE Ltd. The mission of the company is to be a reliable partner in the defence and security sector, offering flexible product development solutions and full life cycle support for heavy vehicles. Since the beginning of 2014 Milrem has been providing maintenance and repair works for the Estonian Defence Forces XA-180, XA-188 and other military vehicles. Repair, maintenance and development operations are conducted in two workshops – one in Tallinn and one in Võru.

Skeleton Technologies is Europe’s leading manufacturer of ultracapacitors, delivering high power, high energy, reliable and long-life storage solutions across industry. Through the use of patented nanoporous carbide-derived carbon, or ‘curved graphene’, we have achieved global breakthroughs in ultracapacitor performance. Our ultracapacitors deliver twice the energy density and 5 times the power density offered by other manufacturers.

In 2014 we opened a 1000 m2 pilot plant and launched our SkelCap series ultracapacitors, which have gained considerable traction in the motorsport, automotive and aerospace sectors, among others. In June 2015 we secured €9.8 million capital from institutional investors for further expansion. Our current customer base includes global engineering companies, the European Space Agency and several Tier 1 automotive manufacturers.
The company employs 48 people and has two subsidiaries: Skeleton Technologies GmbH located in Bautzen, Germany, which deals with manufacturing and sales; and Skeleton Technologies OÜ, located near Tallinn, Estonia, which handles R&D and pilot production.
www.skeletontech.com