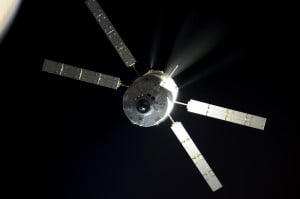 A new energy storage technology capable of providing surges of power on satellites and other spacecraft has been chosen by the European Space Agency (ESA) for testing for possible use in future mission. Developed by Skeleton Technologies, this market-leading ultracapacitor technology is 60 times lighter and 30 times more efficient than the batteries it will replace.

Ultracapacitors store energy in an electric field rather than in a chemical reaction. This makes them highly efficient at delivering sudden surges of energy and allows them to charge and discharge over a million times. The technology is gaining market share in industries ranging from automotive to smart grid, but Skeleton Technologies’ cells will be the first ever used in the European space programme.

While spacecraft, such as satellites, harvest their energy with solar cells, they do have to spend some of the time on the “night side” where they rely on stored energy. This function is currently undertaken by lithium-ion batteries. Although batteries can store more energy than ultracapacitors, they are slow to charge and discharge, lose 30% of their energy through heat alone and require frequent replacement.

Ultracapacitors can charge almost instantly and deliver significantly more power for weight compared to batteries. Using ultracapacitors for tasks such as adjusting antennae and moving solar arrays will considerably reduce the amount of weight and room required for energy storage. With every pound of payload put into space currently costing around €9,000, adopting Skeleton Technologies’ ultracapacitors is expected to achieve significant efficiency savings for the European Space Agency.

Bernard Zufferey, PECS Manager at the European Space Agency commented: "Ultracapacitor technology has the potential to increase mission safety while reducing mission costs. Skeleton Technologies’ SpaceCap cells will allow us to package a large amount of power into a very small space, creating opportunities for new applications. The contract with Skeleton Technologies contributes to the successful integration of Estonian industry with European large systems integrators.”

Skeleton Technologies is a European startup based in Estonia that has achieved breakthrough product performance through the use of patented curved graphene. The company’s product range delivers twice the energy density and 4 times the power density of other ultracapacitor manufacturers. The SpaceCap cells chosen by the ESA offer over five times power/weight advantage and considerably outperform the ultracapacitor cells previously tested by NASA.

“Our deal with the European Space Agency will see ultracapacitors used in the European space programme for the first time, solving a key challenge in space transportation by reducing weight and cost,” explains Skeleton Technologies CEO Taavi Madiberk. “This deployment will provide an extremely high profile showcase for our technology’s capabilities at the same time as we see rapidly increasing customer traction and growing order book down on the ground, from the motorsports industry through to renewable energy applications.”

The next stage of the project, which started in 2011, will involve advanced space-like environment testing of the ultracapacitors and developing the associated regulatory documentation for the ESA. The SpaceCap cells will be trialed under a range of conditions including in a vacuum, at working temperatures and radiation levels before being certified for space travel.

Please note: This project is funded by the Government of Estonia through an ESA Contract under the PECS (Plan for European Cooperating States). The view expressed herein can in no way be taken to reflect the official opinion of the European Space Agency. 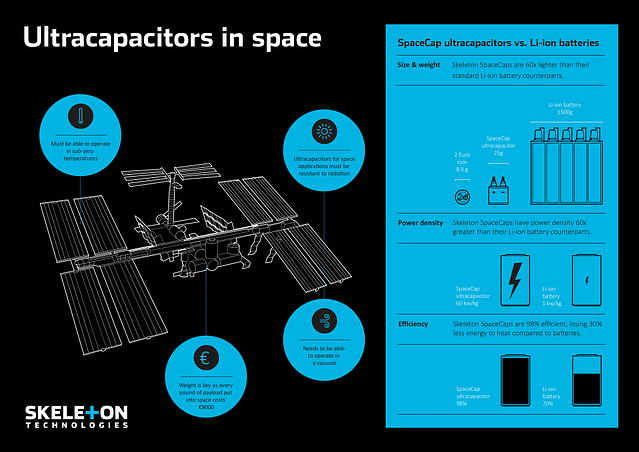