Hybrid Buses Save Fuel and Cost Less to Run
Share on 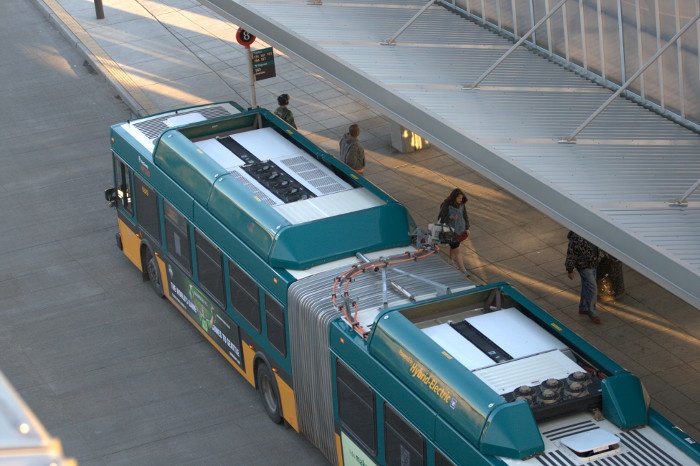 Hybrid buses are now all around us in the big cities.

I recently marveled at how much nicer it is to wait at a traffic light to cross the road and not having to hear the deafening noise of the large turbo diesel engine idling and then picking up momentum as the bus goes away.  Instead the bus moved quietly and started its engine a few hundred meters down the road. All that was audible was the tyre noise on the road and the whizz of the electric motors.

It felt to me as if a quiet revolution was on the move...

The fuel savings achieved by hybridizing buses must be offsetting the cost of implementing this electrical wizardry.

In New York, in 2016, a scheme of implementing hybrid buses has been carried out and the savings were there. Buying a hybrid bus costs roughly $300k more than buying a diesel equivalent, but factoring in the fuel savings, thanks to the hybrid system and the maintenance cost reduction, permits a cool $168k saving over the 12-year lifetime of the hybrid bus, compared to the lifetime cost of the diesel bus. If the health benefits are factored in, this saving goes up to $1.1M per bus over their 12-year lifetime.

In Los Angeles, the transit system saves $46k per year per bus. The buses in the L.A. case are all-electric.

So, not only does the bus operator save money, but the air is cleaner, the pedestrians' ears are protected, and the noise inside the bus is reduced, too.

However, in Seattle, the introduction of hybrid buses has not delivered all that was promised. On the Metro transit system, the "bendy" buses with large battery packs on the roof have been promising up to 20% fuel savings and indeed, during the test phase, this was achieved and bettered (4.46 mpg).

This was without factoring in any potential change in regulation, which materialized. As a result, the buses had to be equipped with a different engine than the one that was initially intended.

This meant that the optimum solution for the bus was changed for the worse. The mechanical and system connections that were optimized for the initial Cummins powerplant never really performed as well with the newly certified Caterpillar replacement. As a result, the fuel savings (3.75 mpg) were negligible compared to the previous diesel iteration. (3.6 mpg).

This happened quite a few years ago, and right now there is a myriad of projects all around the world looking at implementing technologies such as Li-ion batteries and ultracapacitors on hybrid buses as a cleaner transit solution.

Ultracapacitors are already widely used on hybrid buses to save energy, they would excel as a battery replacement as they can charge and discharge quickly and cycle 1 million times or more.