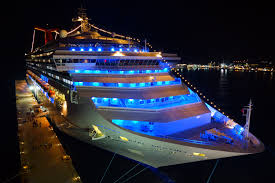 Imagine a small city on water, this is how large ships are like. The critical functions of a small city are also replicated.  Light, water, food, medical care... It all has to fit on board and be ready.

Blackouts also happen on ships, these are called "Dead ship" situations.  Nothing works - at all.

Some of these situations happened on cruise ships such as the Carnival Splendor (shown being built below in 2006/7) and the Carnival Triumph.  These are more common than people might think. It is generally assumed there is a functioning power backup system on board... 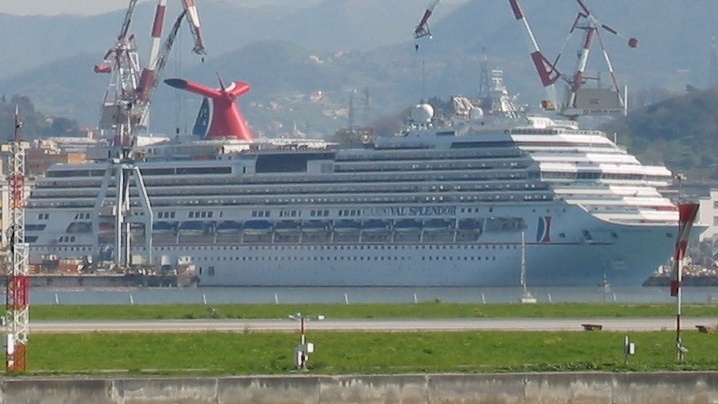 The cost of adding extra secure emergency power supply on ships has regularly been traded off against cabin or passenger space to maximize revenue. Today, only a handful of cruise ships are equipped with compliant power backup systems.

What about regulations? Surely there is a way of forcing the ship operator to make the ship "blackout-proof".

This has resulted in a number of highly publicized blackout incidents at sea, especially on cruise ships, perhaps because cruise ships carry thousands of people and it is difficult to keep stories from coming out if you are dealing with that many people.

That said, if there is a blackout on the ship, so what? We can manage them on land, surely it is not beyond the wit of man to survive blackouts at sea.

Not so fast! At sea, there are situations that do not happen on land.  If there is a blackout on board, it is absolutely "pitch black", a bit like in the middle of a mine, in a lot of areas on or in the ship, there is no light coming through from the outside, no way of seeing where you are going and what you are touching.

All the functions of the ship cease to work, there is no water coming out of the tap, and the water evacuation systems are impaired. The communication system, the radar, collision avoidance, and positioning systems are inoperative.  If the weather is calm and there is daylight outside, it is possible to find refuge on the deck, but if it is during nighttime and in the middle of a tempest... Good luck.

Security at sea is also compromised. Without radar, there is no certain way of finding out where you are and if there are other vessels or boats in the vicinity, this is also perilous in pirate-infested waters.

So, what is causing blackouts on ships? Fires, electrical or mechanical malfunction, maintenance oversight, too much demand on the ship's grid... The reasons are numerous.

Since the IMO (International Maritime Organisation) SOLAS (Safety of Life at Sea) Directive MSC/Circ.1176  of 25 May 2005 The following must happen :

7.1 SOLAS REGULATION II-1/44, PARAGRAPH 1 Interpretation (from MSC/Circ.736) Emergency generating sets should be capable of being readily started in their cold condition at a temperature of 0ºC. If this is impracticable, or if lower temperatures are likely to be encountered, heating should be provided to ensure ready starting of the generating sets.

7.2 SOLAS REGULATION II-1/44, PARAGRAPH 2 Interpretation (from MSC/Circ.736) Each emergency generating set arranged to be automatically started should be equipped with starting devices with a stored energy capability of at least three consecutive starts. A second source of energy should be provided for an additional three starts within 30 minutes unless manual starting can be demonstrated to be effective."

The emergency power system is located outside the main power room,  behind the collision bulkhead, above the last continuous deck. It has to enable the following :

Ultracapacitors' sweet spot of application could be those precious seconds. A set of ultracapacitor modules could prevent the ship from undergoing a blackout and turn a potential situation of life or death into a simple mishap that needs addressing. Ultracapacitors are safe, they do not suffer thermal runaway or catch fire and in this situation, they would be subject to a fairly mild load, so there is no risk of having to replace them quickly.

The ultracapacitors would give the emergency generator time to get up to speed and provide the vital energy that would keep everyone on board safe.

Besides the Skeleton Technologies ESMs are more than capable of handling the cranking powers required by the emergency generators on board even at polar temperatures.

So, to avoid receiving compensation claims from rightfully distressed passengers, this could ultimately be big money and hassle saving for the ships' operators.