Ultracapacitors - the Weapon of Choice for Countering Grid Warfare
Share on

A dispute between Serbia and Kosovo regarding electricity usage of Kosovo has had a significant domino effect on the whole European grid (ENTSO-E). In 25 countries, the 50 Hz frequency has been reduced in order to cater for the energy needed to keep Kosovo from suffering regular blackouts. This meant that all grid-operated clocks such as oven clocks, alarm clocks, boiler ignition clocks (for central heating for example) are late with respect to controlled time.

This can lead to unpredictable consequences such as complicated (but valid) excuses for not making it to work on time.

Could this be called "electrical" or "grid" warfare? Who knows? And what could be the potential solution?

Firstly, with most modern devices an IoT (Internet of Things) clock would most likely replace the electrical clock. However, frequency regulation, or in this case the lack of it, could still lead to sudden and unplanned shutdown of important and sometimes vital infrastructure such as hospitals, fire stations, airports…the list is long.

Secondly, this is where energy storage combined with political dialogue can bring solutions. Batteries and ultracapacitors can cover the needs in frequency regulation for after the meter vital infrastructure as the requirements for power are still at human size.

It would also be possible to connect energy storage units before the meter, but this would be prohibitively expensive and complicated as it is often a problem to find who needs to pay for large grid improvements. This would most likely be in the order of several million euros for a 10 MW grid.

After the meter, or in the case of having a complete disconnection, an energy storage device would very much help taking care of transients caused by poor quality current from the grid. The current grid codes do not cater for ultra-high quality required by modern industry. Robotics and electronics manufacturing equipment require a very steady current.  Micro blackouts (brownouts) or variations of voltage or frequency can lead to the introduction of small errors and poor accuracy, creating scrap and downtime.

Also, short-term blackouts of the order a few seconds may occur too. These are much more damaging as they can take down whole infrastructures and create real chaos. Everyone in the UK will remember the British Airways blackout that took down Heathrow airport.

Ultracapacitors would be the first choice to bridge those vital seconds between the occurrence of the demand surge and the ramping up of the backup solution, be it a diesel generator, the opening of a flood gate on a hydraulic barrage installation, or the coming up to speed of a gas turbine.

In fact, our new product, SkelGrid Omni, is geared up to that effect. It will take care of the brownouts and secure the electricity quality to ensure the demanding requirements of complex, precise, and responsive manufacturing equipment such as printed circuit board manufacturing machines. 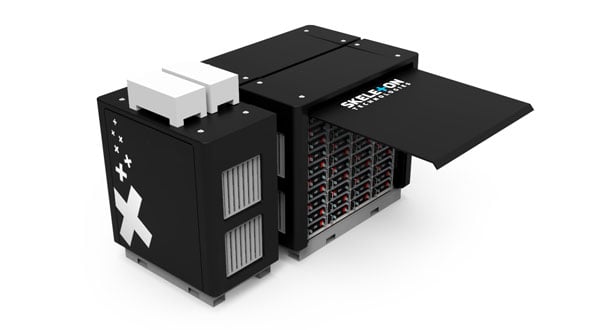 So, in a nutshell, you will not have to check your alarm clock all the time anymore as ultracaps will be there to ensure it remains "on time".