Customer Use Cases: SkelStart Saves the Day in the Dead of Winter
Share on

Trucks are tough and truckers even tougher, but winters in the north can be rough. Icy roads and bad tires are a dangerous combination, as are freezing cold weather and old batteries - there are a number of things that can go wrong in the dead of winter. Waking up to a truck that doesn't start is a bad feeling, but one that you don't have to put up with.

The majority of starting problems are caused by issues with batteries, especially if you are running on old batteries. Batteries were never designed for starting large diesel engines, yet that's exactly what's expected of them, along with having to power the increasing amount of energy consumers on modern trucks: the GPS, fridge, entertainment systems, etc. - it all adds up and the strain on the batteries is severe.

What's more, batteries fare very poorly in the cold weather of North America, Northern and Eastern Europe, and Russia. In fact, the efficient operating temperature range for a lead-acid battery is between about -10°C to about 35°C. The SkelStart Engine Start Module, however, works efficiently between -40°C and +65°C, without fail. The SkelStart has been specifically designed for starting large diesel engines in demanding conditions. And the best part: the SkelStart has a lifetime of more than 15 years, which is at least 2-3 times the lifetime of a typical lead-acid battery used in trucks nowadays.

One of the questions we hear most about the SkelStart Engine Start Module is: "is it a battery?". The short answer is no, but there are similarities.

Both batteries and ultracapacitors have their place in energy storage applications, but for engine starting there is no better option than the ultracapacitor-based SkelStart ESM.

Rainer from Gothenburg, Sweden, has experienced many tough winters in Scandinavia and suffered from empty batteries. To fix this issue, he installed a SkelStart Engine Start Module in his 2011 Scania R620. 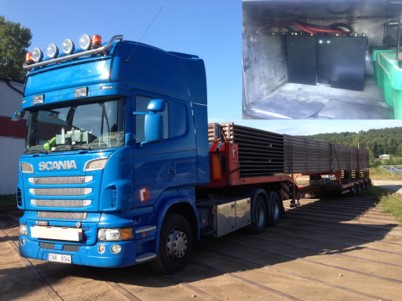 Rainer noticed his batteries' properties deteriorate quickly in cold weather or with years of use. Weak batteries did not crank the starter motor fast enough or long enough to start the cold engine in his Scania. As the temperatures dropped below freezing, so did the batteries' capacity.

A battery that has all of its power available at 25°C (77°F) will have only about 46% available power at -25°C (-13°F). In addition, the engine will be 2.5 times harder to start at -20°C due to thicker oil and resistance to movement of internal moving parts.

With SkelStart installed, Rainer hasn't experienced any more engine starting issues and the lifetime of his truck's batteries has also increased.

Cold winter mornings with -25°C temperatures or lower are not uncommon in northern climates. When the weather turns cold and your truck won’t start, you might be faced with resorting to finding a passing truck driver to help jump-start your truck. This represents a serious business risk to the schedule as you are forced to spend half the day looking for another trucker who can help. That’s assuming you can find someone on infrequently travelled roads who isn’t already behind his schedule and has time to assist.

The SkelStart Engine Start Module can make cold-weather starting a breeze. This is what Igor Kalvo, Member of the Management Board for an Estonian transportation company, OÜ Lemet, had to say about SkelStart:

“We have had a truck with the SkelStart ESM on the roads since September of 2015. The truck usually drives between Norway and Sweden for about a month and a half at a time and we’ve solved a very important risk – the truck will always start, no matter what situation the batteries are in. Previously we’ve had problems with the engine not starting in the morning and driver has had to try and find help for half a day in the middle of Norway in -20°C weather with no other trucks available for help. The good thing is that we don’t have to worry about these kinds of situations anymore. We’ve haven’t had problems starting the trucks on our Norway-Sweden routes this year.”

If it’s a cold winter night and you’re spending the night in your cabin, you want to be sure that it will be nice and cozy inside. For this, you will need to either use the battery power and run the risk of having dead batteries in the morning or wake up periodically during the night to idle the engine. Neither option is ideal because you’ll be annoyed either during the night or in the morning. Instead of that, wouldn’t a good night of sleep and a purring engine in the morning sound better?

Short-range truck drivers, who don’t have to worry about a cold cabin, have a different set of issues when it comes to batteries. Constant stops and heavy lift-gate use take their toll on the batteries, especially if you don’t idle the engine during stops. And even if you do, you’ll run into other problems. Constantly idling the engine can use a lot of fuel. It also means that you might have to breathe exhaust fumes every time you load and unload your truck.

The SkelStart Engine Start Module can solve all these issues, and more. Here's what Kalvo, a truck driver for the Estonian ACE Logistics company, had to say about SkelStart:

“I have used SkelStart on our Scania 94B truck since the spring of 2015. It has made my daily work easier. For example, with the strong cold weather when the truck really won’t start with the first try, I don’t need to go out to look for jumper wires or for a booster for a charge.

I do a lot of short trips and I’ve also noticed that the batteries aren’t as empty by the evening. In the summer we removed SkelStart for a while and when we connected the battery directly to the starter again, you could really feel that the engine started faster with the SkelStart ESM installed.”