Elevator KERS: The next step in energy efficiency
Share on

Skeleton Technologies’ industry-leading supercapacitors power ElevatorKERS (Kinetic Energy Recuperation System). The system is used to capture energy created by electric traction elevators and to re-use it to power the elevator, offering a simple, efficient, and practically maintenance-free way to cut down the energy consumption of elevators by up to 70%.

There are already more than seven billion elevator trips made every single day in the world, and an energy consumption reduction of 70% would have an immediate impact in achieving new decarbonization targets spreading across several industries, including vertical transportation.

It is believed that buildings consume around 40% of electricity worldwide. The already alarming situation can worsen because of rapid population growth and urbanization have forced countries to amplify the architectural trend of building upwards.

Increasing building height leads to higher demand for vertical transportation and a surge in elevator usage, which results in a significant rise in energy demand. Elevators’ energy consumption numbers can be quite dire, accounting for 2% to 40% of a building's total electricity demand. To put that into perspective, it is estimated that the total energy consumption of elevators in the EU-27 is near 20 TWh annually, close to 1% of the total electricity demand in the region.

Elevators are highly intermittent electric power consumers. When transporting passengers, the instantaneous power consumption can be thousand times more than during standby. Moreover, each trip has a fairly unique power profile due to differences in load, direction, and duration.

Elevators also operate in a highly cyclical manner throughout each day and consume considerable amounts of energy. However, elevators also generate energy, which is mostly dissipated aimlessly in elevator drives, but could be captured and reused from one trip to another, increasing energy efficiency.

What to do with generated energy?

Electric traction elevators equipped with inverters, also known in the industry as VVVF (variable voltage variable frequency) drives, produce energy while moving up and down in an elevator shaft. 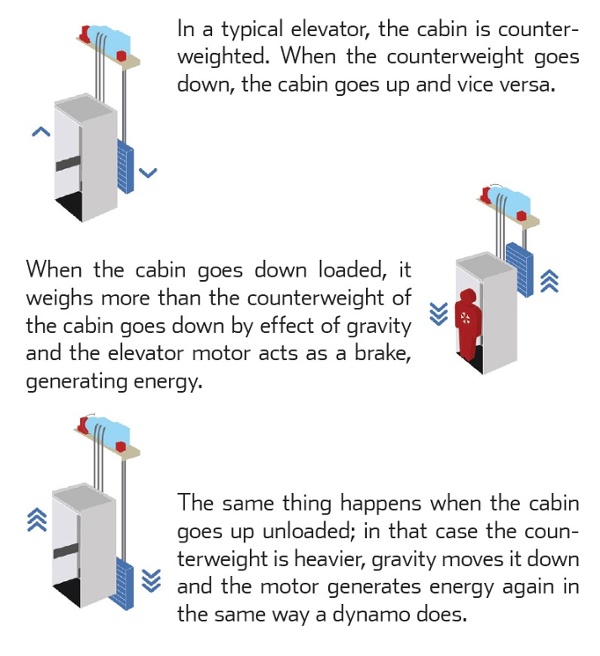 The generated energy can be dealt with in three different ways: by letting it go to waste, using it with a loss somewhere else in the building or re-using it for the operation of the elevator.

So far, the most common option has been to simply let it waste away as heat through a braking resistor. The resistors are activated by the drive and protect the drive from internal overvoltage by removing excess energy from the system.

Another option is sending the regenerated energy back to the grid. This is done via regenerative drives: a normal unidirectional drive is replaced with a bi-directional (regenerative) drive that returns the excess energy into the grid. The upside is the energy injected into the building for other systems to use. However, this energy must be used by within the building network in realtime. On the downside, overall elevator energy consumption is actually increased compared to the first do-nothing-option due to the higher standby consumption of regenerative drives. In addition, regenerative drives require special filters to ensure the energy created complies with the required standards which in addition to the low efficiency, makes the solution less than ideal.

The most energy-efficient solution to pop up in recent times is to store braking energy in supercapacitors and re-using it with almost no loss in the elevator itself.

Such a system detects automatically when the motor is generating and stores the energy before it goes to the braking resistors, and returns the energy before the drive takes it from the network. If the supercapacitors are already full, the energy will still go to the braking resistors, and when the supercapacitor pack is depleted of energy, the elevator draws the required energy fully from the grid.

Hundreds of these units are already deployed on the field, and more are getting interested as energy prices increase, while environmental regulations tighten.

Although new on the market, global manufacturing giants like Schindler are already using a supercapacitor-based solution to save up to 70% on their elevators’ energy consumption.

Combining the positive effects of energy recovery and peak shaving capabilities, Skeleton’s supercapacitors can help save energy and improve the stability of the electrical system in buildings. ElevatorKERS is a device that uses the combination of an energy storage bank together with efficient power electronics to manage the energy flows to and from the elevator, with the help of an integrated logic controller.

ElevatorKERS is designed to make the installation process very easy for elevator operators who don’t necessarily know much about energy storage and efficiency. Customers can achieve a return on investment in under two years, potentially even faster with the recent surge in energy prices. Additionally, customers can stack efficiency certificates given by the gains of a higher efficiency class for the whole building.

Supercapacitors can withstand more than a million charge-discharge cycles with high charge rate and peak power. ElevatorKERS can support an elevator with 4-6 kW whilst being the size of a couple of books stacked on each other. In comparison, using Li-ion batteries would make an equally powerful system bulky and would require yearly replacement. With supercapacitors, on the other hand, the expected lifetime of solution is 15–20 years.

The installation is extremely easy and with a simple 2-wire connection won’t require more than 20 minutes once the elevator drive is accessible. The DC link terminals need to be identified, and with the help of a common screwdriver, ElevatorKERS is ready to go. It manages itself, monitors the supercapacitor cells, and performs cooling when needed while providing energy to the elevator during the consumption and energy storage during the regeneration phase.

•    Over 1 million cycles & longer calendar life: 15 to 20 years
•    Measurable and accessible energy savings up to 70%
•    100% reliable energy storage with zero maintenance
•    No harmonic distortion to the mains
•    Simple integration with a two-wire connection

Get in touch with us to hear more about the advantages of supercapacitor energy storage for elevators.

Kersten Eero
Sales Director - Industry
sales@skeletontech.com
WE ARE AMBITIOUS. SO ARE YOU.