Skeleton Technologies is growing rapidly and is always on the lookout for new talent, but we couldn't have gotten to where we are today without some great people in our ranks. In our management profiles series we take a look at the people who have been a big part in getting the company to where it is today, and will surely have a big role in the continuing growth of Skeleton Technologies. The first one on the hotseat is our Production Manager and a modern renaissance man, Ants Vill.

Could you tell us about your educational background 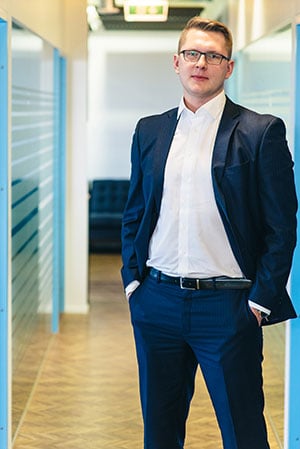 and work history before joining Skeleton?

I started my education at Tallinn French School, where I learned French, which kickstarted my interest in languages. I speak five languages: Russian, French, English, Finnish, and Estonian, and also Latin, but that’s not so useful in everyday life.

After high school I enrolled in Tartu University where I studied politology and law. That was followed by military service as a recon platoon commander in the Estonian military. I was awarded an Order of Merit by the Commander of the Estonian Defence Forces for exceptional service. I even considered a military career for a while, but decided against it.

Once I was done with my military service I started my Master’s studies in Tartu University. Around the same time I was offered a job in Tallinn at Victor Stationary, which is one of the largest paper stationary manufacturers in Europe. That led to me transferring from Tartu University to Tallinn University of Technology, where I studied public management and majored in management of large public organizations. At Victor Stationary I started as a Management Trainee, but got quickly promoted to Kaizen Promotion Officer and my job was to lead the production development department. Later on I was promoted to Production Manager, although Operations Manager would have been a better title for what my duties covered.

I feel I owe Victor Stationary a big debt, due to how much I learned and for the fact that they sent me to various courses such as the world-famous Shingijitsu Kaizen training program in Japan.

In early 2012 I co-founded a company called Hoiame Kokku Grupp, which offers energy savings solutions for both B2B and B2C markets. We are the largest company in our field in Estonia. I’ve also recently started a new company Magus Mull that produces craft lemonade.

What attracted you to work for Skeleton?

The biggest attraction was the opportunity to take part in the development of a new technology and to work for a company with a huge growth potential. Working in the tech sector interested me as well.

While I was in Japan I talked to an American who had worked for Boeing but had moved on to Amazon, and I asked him why. He said that the structure at Boeing was very strict, which reflected on his daily work and he felt he was young enough to change to a company with a different kind of a culture. When the Skeleton offer came through, I thought about his words and realized I felt the same way.

At Skeleton I’ve been able to build the production system for our cells from scratch, which has been extremely interesting and challenging. It’s 80% existing procedures and 20% chaos, constant learning and growth. We make big decisions constantly. In some companies things are settled and you might have to make what I would consider a big decision maybe once or twice a year. Here we get to make those decisions weekly if not more often.

What made you want to work in production and manufacturing?

My father is an engineer and from a young age I’ve liked mechanical things a lot. “How It’s Made” was my favorite TV show growing up. In Estonian high schools they don’t talk much about the production sector as a possible career option, but when I started at Victor Stationary I knew that production is where I wanted to work.

What's the best thing about working at Skeleton?

You rarely see a company with so much energy, positive attitude, and so many professionals. Everyone does what they are supposed to and more. Things are moving, and we get results. There are no freeloaders. The company has a very good reputation and is well-known in the industry.

What would you say motivates you the most?

From a philosophical point of view, the production sector is the only sector that adds value to society and the product. The modern world is very strongly based on the industrial revolution. A large part of it is also the fact that I can directly influence the quality of the product with my decisions and the output of my daily work.

What achievements are you particularly proud of?

At Victor Stationary we achieved an increase of 16% in production efficiency while I was the production manager, and I’m proud of that number. I’m also proud of co-founding and building Hoiame Kokku Grupp to where it’s at today. And last but not least, my work at Skeleton. I’m proud of building a working production system that is achieving great results.

Have you had any mentors or people who deeply influenced who you are?

From a professional point of view, I would mention Jim Booth and Art Byrne, who are lean manufacturing pioneers from the United States. I’d like to mention my father as well, because he has always supported my interest in engineering and mechanical things.

What do you do outside of work?

I’ve done karate and boxing for a long time, and been successful in karate on a national level. Other than that, I like to drive my motorcycle, go on walks with my dog, or out with my girlfriend.

Where do you think Skeleton will have the biggest impact globally? How do you define success for Skeleton and yourself?

Skeleton will definitely have an impact on the energy sector. I will feel we’ve been a success when we move up the value chain to create modules for different industries, which will add value to the core product. We will offer a turnkey solution for various industries. The first step in the near future will be the point when Skeleton will be the market leader in Europe for energy storage modules.

Skeleton's management team is filled with highly-skilled professionals with varied backgrounds. Together they form the core of Skeleton Technologies, helping us grow to new heights by producting the best energy storage solutions in the world to meet our end-goal and vision: help people to save energy.