One of the major downsides of batteries is safety, and the dangers of batteries are well-publicized. After all, who hasn't heard of the Samsung Note 7 battery debacle? Many major airlines refused to seat passengers that wouldn't part with their Note 7 phones, but already before this particular case, the US Federal Aviation Administration, among others, was concerned about lithium-ion batteries onboard aircrafts.

In the unlikely event that an ultracapacitor catches flame, it can be easily extinguished with water, which dilutes the electrolyte enough so that it can't burn anymore.

Five ways to spend your day with ultracapacitors

We tested, and by "testing", we mean tried to destroy, a SkelCap ultracapacitor cell to confirm what we already knew about ultracapacitor safety, and to get a thorough understanding of how ultracapacitors react in different, extreme circumstances. We used the Skeleton Technologies SkelCap SCA0500 cell, since discontinued, for our ultracapacitor safety testing. However, our cells are just as safe at any size, including the largest cells at 5000F. 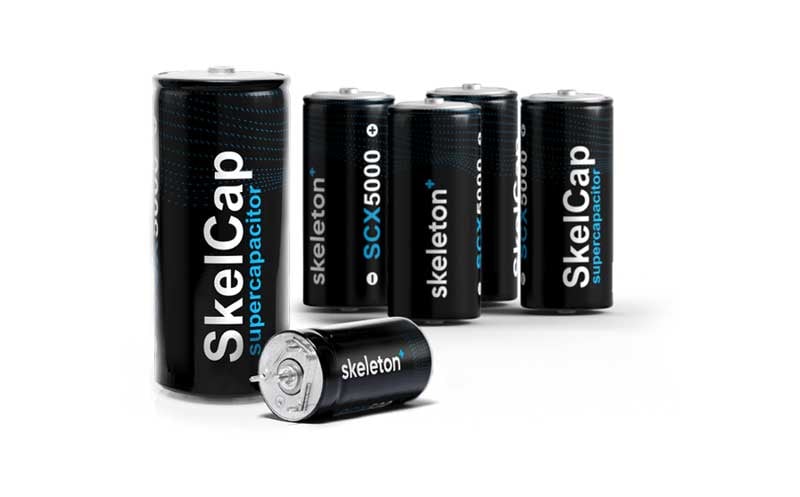 For each part of the test, we charged the cell to its nominal voltage of 2.85V to simulate the real-life behavior of the ultracapacitor.

We directed a flame toward the ultracapacitor from about 10-15 centimeters away. The temperature on the cell surface quickly rose to more than 400 °C, or 752 °F, at which point our thermal camera got overloaded. Once the pressure inside the cell reached a critical point, the cell's safety valve opened and released the electrolyte and decomposition product vapor, which evaporated instantly. It's worth noting, that no explosion or combustion took place when the cell was exposed to open fire. The safety valve worked perfectly and relieved the internal pressure of the cell as it reached 12±2 bar.

Next up was the nail penetration test, which was done to simulate internal short-circuiting of an ultracapacitor. We simply pushed a nail through the cell casing while the cell was charged at 2.85V, which resulted in some electrolyte vapors releasing. Once again, you'll see no explosions or combustion, which highlights the safety of our ultracapacitor technology.

The SCA0500 ultracapacitor is very powerful despite its small size. We short-circuited the cell by attaching wires to the cell terminals, and using a piece of aluminum to connect the other ends of the wires. As shown on the video, the aluminum melts in seconds. The melting point of aluminum is 660 °C or 1220 °F. Short-circuiting the cell doesn't harm the cell, and it remains fully functional after being short-circuited. Of course, it should be taken into consideration that while the cell is unharmed, other parts in the circuit might suffer some damage.

Overcharging the ultracapacitor was done by charging it with 10 amperes at 3.3 volts. This caused the cell to heat up, and similarly to the burning test, pressure built up inside the cell due to electrolyte decomposition and an increase in temperature. Safety valve to the rescue! At 12±2 bar, the safety valve opens and releases the internal pressure. Overcharging the cell was the moment we got the most action during our safety testing, as the releasing electrolyte vapors ripped the cell sleeve open. But once again, you'll see no explosion, no combustion. Ultracapacitors are a remarkably safe way to store energy.

The last test, crushing the ultracapacitor with a hydraulic press, turned out to be perhaps the least eventful of the five tests performed. The cell, charged to its nominal voltage of 2.85V, releases a small amount of bulk electrolyte as it is crushed. No fireworks, no explosions. Just a controlled, slow flow of electrolyte out of the cell.

So, there you have it. Compared to batteries, ultracapacitors are an extremely safe way to store energy. Will Samsung turn to ultracapacitors to power the next-generation Note? No, because batteries have much higher energy density, which makes them great for applications such as mobile phones.

But the fact remains that while lithium-ion batteries are generally safe and fairly reliable, they can be very dangerous in a number of situations, and possess a high risk of explosion and combustion when exposed to shock or extreme heat. If you are curious to read more, check out our infographic on the differences between ultracapacitors and batteries.