What's the Difference between an Ultracapacitor and a Supercapacitor?
Share on

Don’t worry, you’re not the first person to wonder about that. If you’re looking for a short answer, here it is: there is really no difference. Ultracapacitor and supercapacitor are the same thing, although supercapacitor is the umbrella term for this type of energy storage device. For a longer answer, we need to delve deeper into the origins of the words and the history of supercapacitors (or ultracapacitors, whichever you prefer).

The internal structure and components of a supercapacitor cell

Let’s rewind about 70 years to the past. General Electric engineers were the first to start experimenting with porous carbon electrodes in capacitors in the early 1950s, and in 1957 a GE engineer called Howard Becker developed a “low voltage electrolytic capacitor with porous carbon electrodes”. Strangely, he was unfamiliar with the double layer mechanism discovered already in the 1850s and expanded upon ever since, and wrote in his patent: “It is not known exactly what is taking place in the component if it is used for energy storage, but it leads to an extremely high capacity.” General Electric did not pursue the work further, opening the door for others to continue on the path.

Another version of the component was developed in 1966 by researchers at Standard Oil of Ohio, who named it “electrical energy storage apparatus”, but didn’t mention the nature of electrochemical energy storage in their patent. Just like General Electric, Standard Oil of Ohio chose not to commercialize their invention, but instead licensed the technology to Nippon Electric Company, nowadays known just as NEC, who in 1971 brought the product to market, calling it “supercapacitors”. These supercapacitors were first marketed as backup power for computer memory. 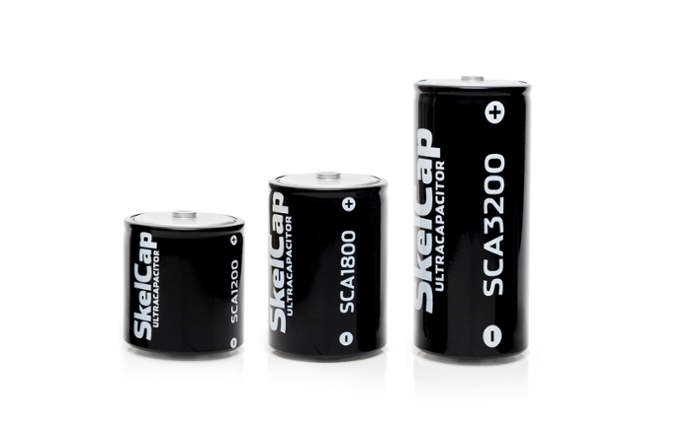 By the end of the 1980s, the improvements made in electrode material research increased capacitance and electrolytes with better conductivity resulted in lowered ESR, which stands for Equivalent Series Resistance. The extremely low ESR in modern supercapacitors is what makes the extremely long lifetime of supercapacitors possible.

The lowered ESR resulted in the creation of the first supercapacitors with low internal resistance. They were developed in 1982 for the US military by the Pinnacle Research Institute. The brand name for the product was “PRI Ultracapacitor”, which is the first instance of “ultracapacitor” being used as a description of an electrochemical double-layer capacitor.

As you know, the development of supercapacitors didn’t stop there but keeps intensifying as manufacturers keep coming up with ways to increase power density and energy density. Skeleton Technologies is at the forefront of the supercapacitor industry with its SkelCap supercapacitors.