Why Are Batteries Used to Start Engines? There's a Better Way
Share on

Do you drink liquids from a plate, or eat solid food from a glass? No? neither do I. But we all start the engines of our cars, trucks, and boats with batteries, a technology that was never intended for that purpose.

In fact, starting an engine is the single most demanding task that batteries face during their operational life, and are often faced with this task many times a day. By using batteries to start your engine, you are actively contributing to shortening the lifetime of your batteries, and therefore increasing their lifetime cost.

It won't come as a shock to you that Skeleton, as an ultracapacitor developer and manufacturer, has an alternative solution powered by, you guessed it, ultracapacitors. The SkelStart Engine Start Module is the ideal solution to engine starting, and specifically designed to do just that - start your engine in any conditions.

We launched the first generation SkelStart Engine Start Module about 1,5 years ago. At the time, many people had no starting an engine with ultracapacitors was even possible. Outside of a circle of pioneering engine-crankers, that hasn't changed. Batteries have the market covered so well that their use in engine starting was not even questioned.

Truckers, mining companies, boat owners, construction companies, and forestry machine operators were not looking for alternatives, because were not aware there is a better way.

Batteries are the single biggest cause for starting problems, so why are they still relied on to do something they were never designed for?

Let's look at the differences between batteries and ultracapacitors, and by the time we're done, you'll be scratching your head as much as I have for the past couple of years.

Batteries excel at providing low, steady current for long periods of time. This includes tasks like powering the entertainment and lights. Loads that don't require high peak power, but demand power for extended periods of time. With the engine running, your batteries can easily handle this for as long as needed.

Starting the engine requires a burst of power for milliseconds to seconds. From the batteries' point of view, this is the exact opposite of what happens with hotel loads.

The impact of temperature on engine starting

In the graph below, the blue line represents the energy available for the SkelStart Engine Start Module at different temperatures, whereas the orange line shows the same data for a conventional truck battery. At -40°C (-40°F), the battery is operating at 25% of its capacity, but the SkelStart is still working close to full efficiency.

This is of course an extreme situation. If we look at a more common winter temperature in the northern latitudes, -20°C (-4°F), you can still see a clear difference. The lead-acid battery stands at around 60% of full capacity, where s the SkelStart is practically unaffected by the temperature.

Batteries store and release energy through a chemical reaction, which is slow compared to ultracapacitors. To give you an extreme example, think of iron rusting. It's a lengthy process.

Now, batteries do their thing quite a lot faster than rust, but the principle is the same, the reaction is not instant. And just like the lithium-ion batteries that power your phone or laptop, your vehicle's batteries suffer from mechanical degradation of the chemical process, leading to lowered capacity over time.

Ultracapacitors store and release energy in an electric field, and are therefore able to respond almost instantly. The lifetime calculation for ultracapacitors is a more complicated process, and ultracapacitor lifetime is affected by the voltage and ambient operating temperature of an application. It is, however, a fact that ultracapacitors can routinely operate for more than 15 years with very little, if any, need for maintenance. Ultracapacitors also retain their capacitance throughout their lifetime.

Modern batteries can withstand more than 5000 charge-discharge cycles, although capacitance is lowered the latest after a few thousand cycles. For ultracapacitors, 1 000 000 cycles is the minimum expectation in optimal conditions.

The SkelStart Engine Start Module has a lifetime of more than 10 years, so it will outlast most vehicles it is installed in, and of course, you can just take it out and install it in your next vehicle.

SkelStart is the ideal solution for engine starting

The maximum speed of a starter is 200 rpm, and 100 rpm is needed to crank an engine. In cold temperatures, batteries have difficulties providing enough power for even 100 rpm and therefore a lot of energy is wasted as unnecessary heat, which will also shorten the starter's lifetime. 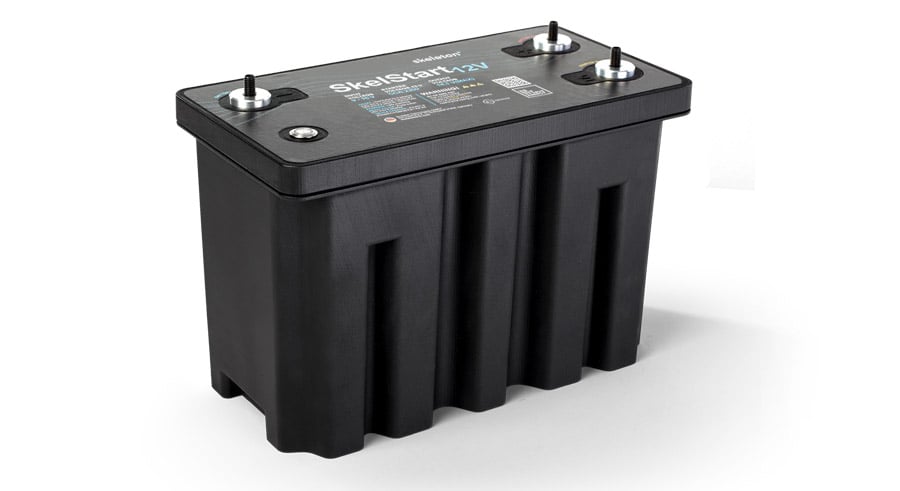 The best thing about SkelStart is that it can be used to start many different kinds of engines. We've installed SkelStarts on trucks, buses, boats, yachts, forestry machinery, mining equipment, heavy machinery, and generators. If there's a large diesel in your vehicle or equipment, SkelStart can start it.

SkelStart can give you peace of mind, help you get rid off excess fuel consumption because of idling, and on top of that, extend the lifetime of your batteries.