If you can't, don't worry. The amount of different types of capacitors is confusing even for people in the industry because the terms are used interchangeably (and sometimes incorrectly), which just serves to increase the confusion.

What makes it worse is that there's a lot of mystery surrounding energy storage technologies because companies and research institutions publish press releases, white papers, and research papers about breakthrough technologies, promising the moon.

Yet here we still stand, staring at it.

Yes, we've been on the moon, but you get my point: no capacitor, no matter the prefix, will power my moon rocket, nor the imaginary Tesla in my front yard any time soon.

Nevertheless, the abundance of terms in the industry has led to a situation where it's difficult to distinguish between the technologies. That's why we thought it a good idea to clarify the differences between these types of capacitors, and at the same time explain their intended uses, benefits, and downsides. 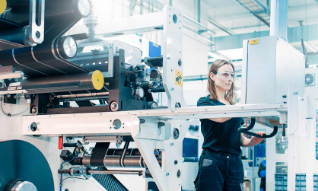 Supercapacitors in general have some extremely beneficial characteristics. They possess a higher power density, significantly longer lifetimes, and charge and discharge much faster than batteries. The downside is that supercapacitors have a low energy density, which is why they are not used instead of batteries for most energy storage applications with high energy need.

The ultra- and supercapacitors advertised and sold today are EDLCs - Electrochemical Double-Layer Capacitors.

They are among the purest forms of physical energy storage because while there are chemicals within the cell, no electrochemical reactions take place upon charging or discharging it.

The two charged layers of the EDLC, the charged electrode and a layer of oppositely charged ions, store the energy in an electric field, enabling an extremely low internal resistance, leading to the long lifetimes, high power, and high-efficiency EDLCs are known for.

It's possible to manufacture better EDLCs than are on the market today, but the cost is so high that it's not realistic to use them in real-life applications.

Supercapacitors are a great energy storage technology for applications that require high power, high current, fast charging and discharging, and long lifetimes. But just like with batteries, improvements come incrementally as a result of diligent research, testing, and hard work.

Pseudocapacitors were born when, while researching EDLCs, scientists started noticing that they were getting more capacitance out of porous, high surface area materials such as Manganeseoxide, Rutheniumoxides, and other oxides.

It was discovered that reversible electrochemical reactions occurred between some of the aqueous electrolytes and these materials, and the behavior was coined "pseudocapacitance".

A lot of research has and is being done on pseudocapacitors, but the existence of electrochemical reactions (part of the energy is not stored in a layer of ions, but in chemical bonds), while increasing energy density, decreases power and lifetime of the cell. As of yet, this problem has not been solved.

So, EDLCs rely completely on physical storage of energy, while pseudocapacitors store parts in both physical and chemical energy, and both can be called supercapacitors.

Hybrid capacitors are asymmetric, which means that the capacitor is a combination of a porous carbon electrode and one other material, generally, metal oxides, conducting polymers, or metal-doped carbons. This combination of an electrode with high pseudocapacitance and an electrode with high double-layer capacitance provides both high specific energy and high specific power. The downside is a decreased lifetime of the cell.

If you are wondering why EDLCs and batteries can't be combined to create the ultimate energy storage technology, wonder no more, because that's exactly what Li-Caps are trying to accomplish - to combine the best features of both slow and fast energy storage.

Ideally, Li-Caps would have the high power density and long lifetime of EDLCs, as well as greatly increased energy density compared to the EDLCs on the market today. However, up to now the only thing that has actually been accomplished is the creation of a device that combines both the disadvantages as well as the advantages of both systems.

Commonly described Li-Caps yield higher specific energy than EDLCs and pseudocapacitors, but the amount of stored energy is still significantly smaller than a classic lithium-ion battery would store. At the same time, Li-Caps yield significantly less power than an EDLC. As the third property, lifetime for Li-Caps (10,000 to 20,000 cycles) is higher than the values we would get for batteries (500 to 1,000 cycles), but still a far cry from the values we expect from supercapacitors (1,000,000 cycles).

While Li-Caps represent a promising concept for energy storage, they have one technical difficulty: In most cases, Lithium has to be brought into the system by a step called “pre-lithiation”, which is time-consuming as well as technically challenging.

In the end, we have to also consider that the "low-tech" version of a Li-Cap may be equally efficient, but tedious to build: a lithium-ion battery and a capacitor in the same circuit and managed by an intelligent software may provide similar benefits as an "internal" Li-Cap.

Not sure if you need supercapacitors or batteries? Check out our infographic comparing supercaps and batteries

Lastly, for the sake of clarity, let's examine what's left when we cut the prefix and are left with just "capacitor". Capacitors are components widely used in electrical and electronic engineering, computer design, and various other fields. They are able to store energy, like supercapacitors, but to a significantly lesser degree. A capacitor consists of two metal foils that have been rolled into a cylinder shape with a dielectric medium in between. The main difference between capacitors and supercapacitors is that supercapacitors have generally two to three orders of magnitude higher capacitance, or energy density. Capacitors are not to be confused with any devices falling under the supercapacitor umbrella, because their features and intended uses are vastly different.

Which type of supercapacitor would fit my needs?

EDLCs, pseudocapacitors, and hybrid capacitors all have their own upsides and downsides. If you think supercapacitors could improve whatever you are working on, but you are not sure which type to pick, you are in luck (sort of). Currently, only EDLCs, commonly marketed and sold as ultracapacitors or supercapacitors, have a proven track record and are widely used.

Pseudocapacitors, hybrid capacitors, and Li-Caps are being heavily researched, but it will still be a while before their theoretical benefits can be realized for practical uses outside the laboratory.

Whoever overcomes the challenges of combining li-ion batteries and EDLCs in a cost-effective way, will greatly accelerate the hybridization and electrification of a number of industries, representing a huge shift in energy storage towards more efficient systems.

In the Ragone chart below you'll find a ballpark estimation of the power and energy densities for capacitors, different supercapacitor technologies, and conventional batteries. It's good to keep in mind, though, that these are just estimations and partly theoretical. The numbers given by researchers and manufacturers can differ significantly, so a healthy dose of skepticism is often a good starting point.

Questions or comments? Reach out to us or subscribe below to stay up to date on the energy storage industry.